Did You Buy a Gun This Week? Why?


Sunday's Santa Fe New Mexican reported a run on guns and ammo at the Outdoorsman of Santa Fe. Apparently this is not unusual right now and is happening elsewhere in the state, in part due to news that the Albuquerque City Council will vote on a proposed expansion of emergency powers to shutter gun shops. Whether that happens, and whether it is lawful, is beside the point. That, along with all of the other uncertainty and worry going on due to COVID-19 is resulting in a mad buying binge. But we don't need a buying binge right now. We need a caring binge.

As far as Santa Fe as reported by the Santa Fe New Mexican's Daniel Chacon:


“That rack is usually full of basic pump-action shotguns — all gone,” salesman Jay Winton said last week as he pointed to an empty rack in the store at DeVargas Center. “People … want to defend their home from the ravening hordes that they’re convinced are coming, so we’re selling lots of ammunition, lots of firearms.”

But at times like these, its perhaps best to remember Franklin Roosevelt's First Inaugural Address:


"...So, first of all, let me assert my firm belief that the only thing we have to fear is...fear itself — nameless, unreasoning, unjustified terror which paralyzes needed efforts to convert retreat into advance. In every dark hour of our national life a leadership of frankness and of vigor has met with that understanding and support of the people themselves which is essential to victory. And I am convinced that you will again give that support to leadership in these critical days..."

But really. If you bought a gun, or are considering buying one right now, consider the following:

1. The Spanish Flu of 1918 killed more people than World War I and about a half percent of the U.S. population. We persevered.
2. The Great Depression unemployment rate peaked at 25%. We persevered.
3. Do you know how to use that gun in a crisis when a few seconds count? Do you know Jeff Cooper's Four Rules? Do you know the laws of the use of deadly force? Do you know how to store a firearm safely, esp. if there are kids around? If you are a first time firearm owner, do you know where to sign up for a gun safety class before you put a round in the chamber?  If you are unsure of any of these questions, lock that gun up until you can pass my quiz with an "A". You are more of a hazard to yourself and others than a resource.

"Bullets don't have a reverse gear"
-Me

We cannot shoot a virus. We can only shoot each other and quite possibly, live the rest of our lives  with the knowlege of having made a fatal mistake. We need to help each other and find common cause in working through this pandemic rather than fearfully arming up against hypothetical "ravening hordes" or collapses of civilization that will only happen if we as a people affirmatively make it happen.

So if you have a few  hundred bucks to burn, perhaps its a better idea to donate it to the Red Cross, the food bank, Santa Fe Community Fund, or some organization trying to raise funds for COVID-19 test kits or ventilators. Yesterday we bought water containers and distilled/deionized water and delivered same to a close and elderly friend with serious medical conditions who has some medical contraption that needs DI water to function. She is, as she said to us, "one of the people for whom a COVID diagnosis would likely be a death sentence". 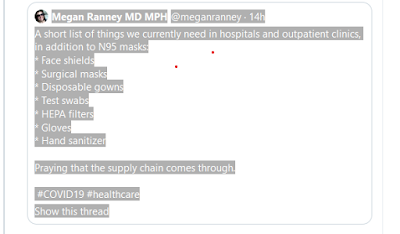 Stop and think. Look around you. As FDR so beautifully said, we have nothing to fear...but fear itself.

Disclaimer: I am on the Board of Directors of the Los Alamos Sportsman's Club. These are not club views or Board views but my views alone.
Posted by Khal at 9:46 AM